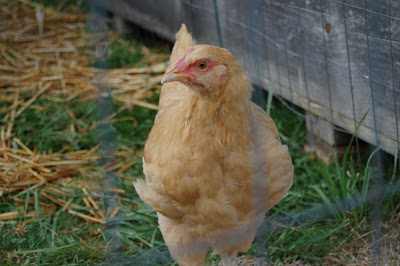 I would like to introduce you to Goldie the lucky chick. Why, you ask, is she lucky and how did you come to name her Goldie? Well now, that is quite a story and one I waited to tell you until I knew that the end would be what you would want to hear. 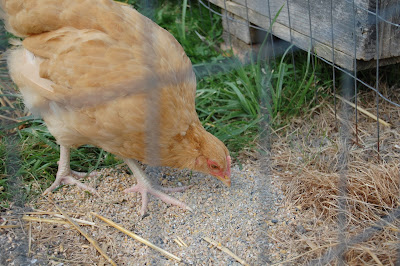 If you will recall the post about Mr. B. and his Barred Rock Chicks, you know we got them at the feed store and Goldie had asked to come home with us too. She promised to be a very good chicken and hatch many wonderful chicks for us. We discussed it and decided that she looked like an honest sort so she packed her little bag and came along with.
Mr. B. made the chicks a nice condo on the floor of the coop with central heat a kitchen and play area (open concept design) and a swinging door that could be properly secured at night to keep out the undesirables in the neighborhood.
The days went by and they grew and ventured out on their own to the 'big' chicken run. Brace yourself for the horrid details, the story I couldn't tell you until now....Well, I looked out the kitchen window to check on everyone and saw two buzzards circling around above the run. If any of you know anything about rural living you know that is not a good sign. I ran out the back to see that the rooster had everyone in the small run by the coop (he thinks that is the only covered run) but the little Barred Rocks were running around frantically still in the big run. When I got to the gate I could see Goldie (not yet her name) caught up in the chicken wire fencing with a bloody neck and I presumed, dead. I hurried and got the two chicks in with the others and closed that run off so they would be safe as I didn't at that time know what killed her.
At this point I must tell you a bit about myself..I might live out most of my time here in rural land and I might clean out poopy chicken coops and help Mr. B. with projects etc...but I do not, and I repeat, I do not do, bloody, dead or alive, animals. So with that said, you know it took all I could do to go over and try to figure out what had killed her in the short amount of time between me checking on them (a bit obsessive about it). When I got there she started squawking and trying to get free but she was really intertwined and the back of her neck was peeled back and blood was all over....I ran in the house and got my scissors and ran back out (I know I shouldn't run with scissors but I did hold them properly if that counts) and as carefully as I could I cut her out, put her in a towel that I grabbed and called Mr. B. who hurried right home and took a good look at her and said that her scull was showing. Great! She was not bleeding anymore and didn't seem to be injured anywhere else so Mr. B. called our Vet and off I was sent to another Vet about 30 min. drive, two towns away with a wounded chick in a box....Wonderful. The drive seemed forever but when I got there the Vet said he had seen worse and could stitch her up good as new. I won't tell you how much the 'good as new' was, but that is the answer to your question, why we named her Goldie. 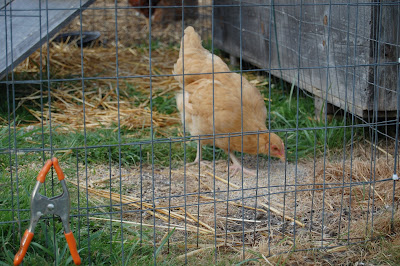 Here she is in her private 8'x8' run. The rest of the chickens are mean to her so until we can get that worked out she must be kept away from them. At night she is back in the house in the large dog carrier/coop that I made up for her to recover in. 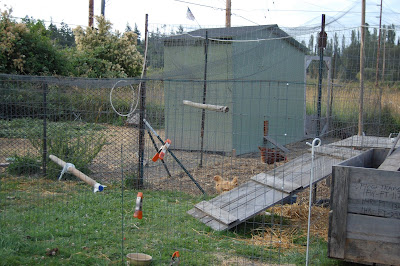 Mr. B. built her run by the other one in hopes that the chickens will get used to her. Chickens are an odd lot. 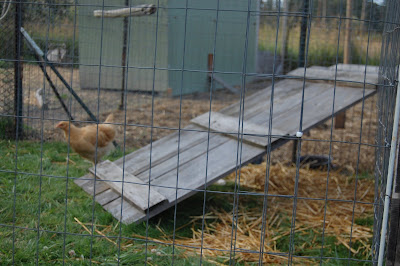 I did the interior design work keeping with the ever popular rustic theme...I will keep you up to date on Goldies progress.
*
*
* 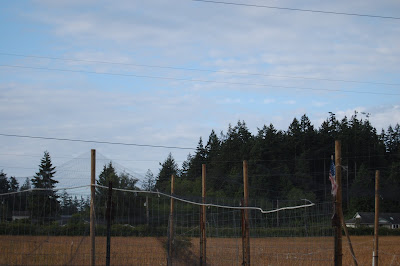 It looks like it is going to be a nice day. This is looking south and right behind the trees is the beach so I can usually tell if something is creeping up on us. The wash will be on the line soon. 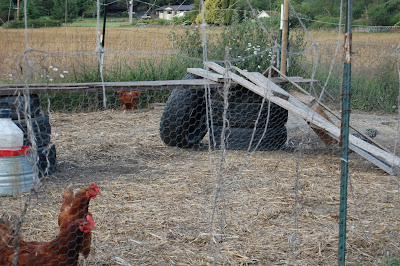 Here is my sorry attempt at a shelter/fort for the chickens to get out of the rain or get some shade. It fails on design but they love it and it works. Oh, and the tires serve as a makeshift nesting area for lazy chickens who don't want to take the time to go to the coop. Mr. B. filled a small basket with eggs he found in one of the tire towers last evening. 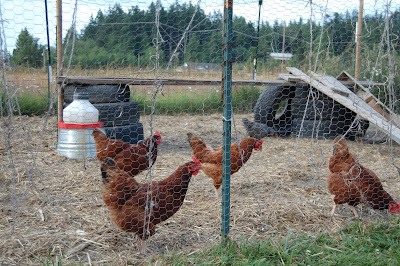 Hope you enjoy your Tuesday.

Oh, Sherri! What a story... had my attention until the end... lucky girl indeed.

I picked up 6 chicks yesterday! 3 Barred Rocks and 3 Ameracaunas (sp?) . Very cute but a little overwhelming; I feel like I am on a steep learning curve. I will be posting about them soon. I'll email if I have any questions... thanks for your offer:)

Oh my goodness, I was riveted! So glad it all worked out and your bravery is to be commended.
That is one lucky chook to be sure!
I hope all is well with that precious little boy. I know how hard it is to await tests and consultations when it comes to the little ones we love. Your family is in my thoughts and prayers.

Poor Goldie and poor you. That must have been awful. I can't believe that Goldie is doing well after all that. I hate those buzzards, harsh words, I know. For two years we had at least 200 buzzards nesting in our trees during the winter. This year my husband threatened them and they finally left.
Let us know about Jude's results.
Now you need some rest, hah.

Isn't it a shame that the other birds know there's something different about Goldie and bully her?
Thanks for dropping by and *shhhh* but that pic is not MY Barbie. Mine, like yours I expect, lost her toes very quickly and the back of her knees cracked, but I never cut her hair or painted her face with biro so she does still look quite good. xx