I love being able to hang a load of clothes on the line at City House and have them dry in 2 hours..amazing. 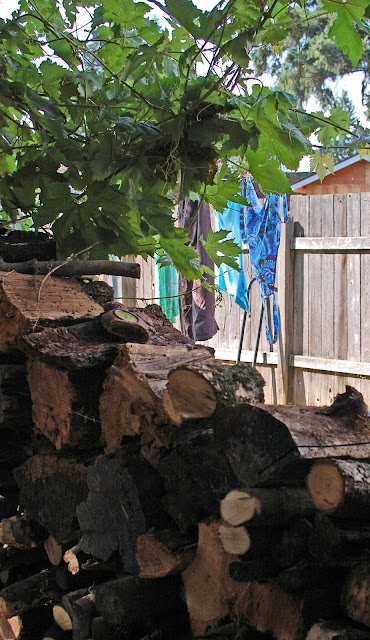 On the other hand, 245 miles north, at Little House, it can be an eighty five degree day and the laundry will be on  the line at 9 am and hang there all day until 5 or 6 and I will still feel a slight dampness.

I will be heading back up there tomorrow morning, the Mister reports that there are plenty of blackberries along the driveway, calling my name....Can't wait to get to making the jelly and filling the freezer with those beauties.  Just knowing that they will be there come winter, when I get a craving for a blackberry upside down cake or perhaps a cordial for a special Christmas gift...well, it's like money in the bank.

I do hope your week is going well and you are enjoying your summer.

I will check back in with you Friday with a berry report.  xo
Posted by Sherri B. at 6:14 PM 12 comments:

Sometimes it takes me awhile to figure things out but eventually it will finally come to me. So, it occurred to me, that perhaps the reason for my lack of posting is that I have bloggers block. I asked myself, "Self, is there even such a thing as bloggers block"? And Self, being the smarty pants that Self is, said.."If you are a blogger and can't seem to come up with a proper blog post, then I guess you could call it a block." 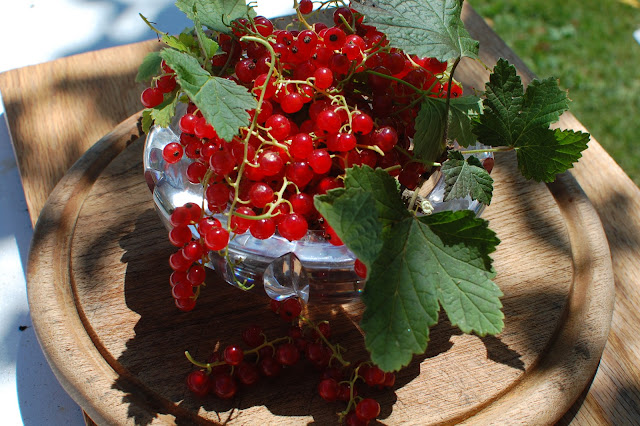 (The currents have absolutely nothing to do with anything, I just thought they were pretty and I was pleased that I got them before the birds did.)

That is it in a nut shell, I guess I am just speechless...wow, my family will be happy to hear that..ha!

Hope you are all having a happy summer weekend, see you next week.  xo

Invitation to a Tea Cup Exchange

I started collecting tea cups over thirty years ago. Sometimes it seems like just yesterday that I was starting my family and sipping my tea out of one of the first of many bone china pretties to come into my life. 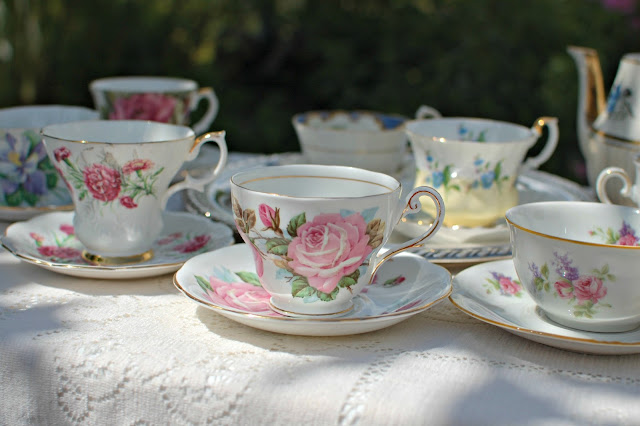 This one, in the middle with the pink roses, I remember using most mornings while I was pregnant with Kami, my only daughter and last child.

A pot of tea with breakfast and the Oregonian newspaper, was a way of life for me back then and my cups had a lot of use. 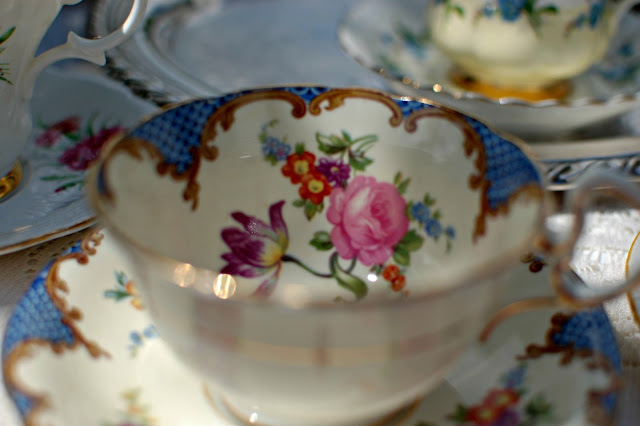 Money was tight back then and I would have to limit the amount that I could spend on the cups at Estate or garage sales...I could not go over $2.00 but a $1.00 was much closer to what I was willing to do. 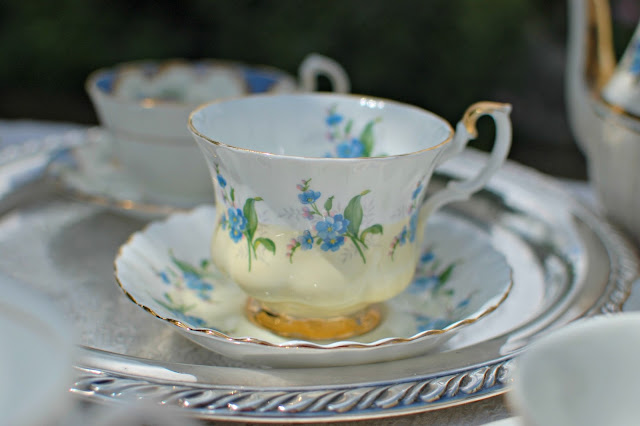 It has been quite some time since I have even thought about adding to my collection.  Perhaps it is because I have so many that I can't even keep track of them.  When I went looking for them this morning, I realized that many are not even here and have been put away at City House.

I had forgotten the joy I get from looking at how pretty they are.  Different sizes, shapes, colors, flowers and all with their own personalities. 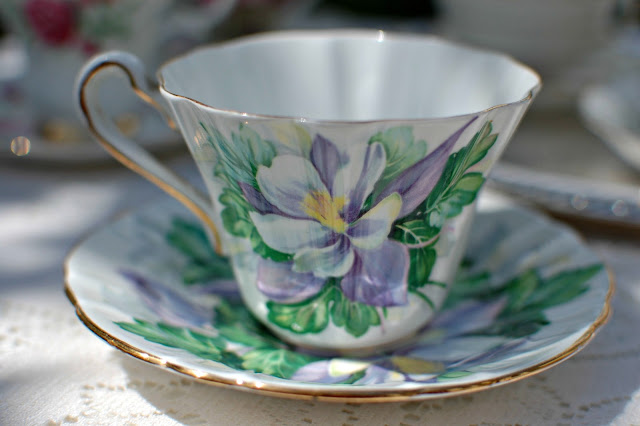 I think that now is a good time to start being on the hunt for those special ones that catch my eye and add them to the collection.

The first one that will be added though, will be from a swap..how fun is that?

Stephanie from The Enchanting Rose, is hosting this event and will be organizing it all.  You just need to go visit her and leave your name and email and she will do the rest.. Here is the link to find out the details. Thanks Stephanie!

Off I go..back out to do more around the yard and garden, the weather has been great.  Hope you all have a happy and sunny weekend.  xo

I have a very puzzling story to share with you today.  You may think that I am trying to pull your leg on this one but right up front I will say that it is not the case. 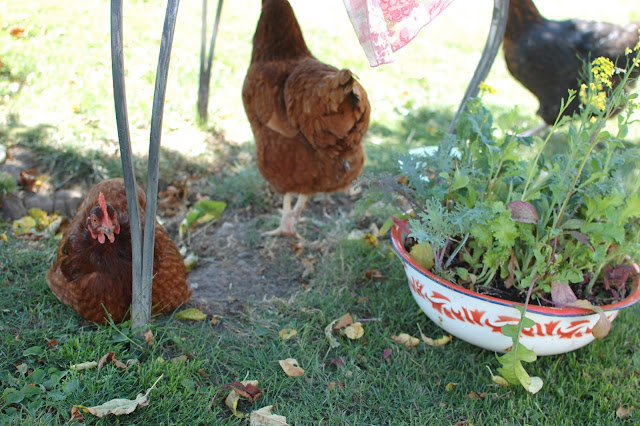 Let's begin with the fact that all we have remaining of our flock are these three hens.  If you have been a friend of this blog for a time, then you will know we have had some unfortunate happenings that I won't relive right now but have something to do with....Eagles..and other wildlife inviting themselves over for a meal or two.  After the demise of the rooster we decided to take a break for awhile and regroup before adding more back to the flock. 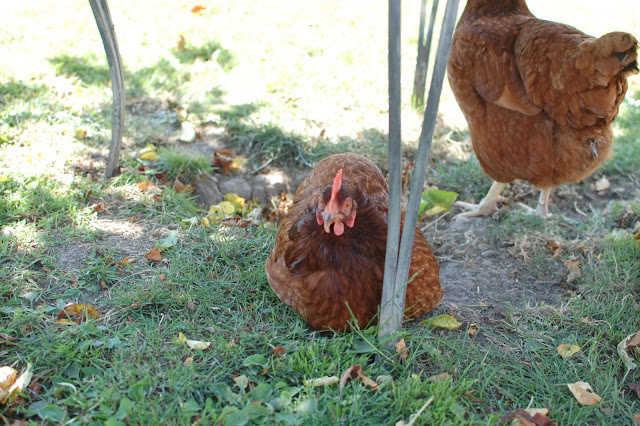 These two are a little over 5 years old and still laying..not as much as before but still we are getting eggs on a regular basis from all three. 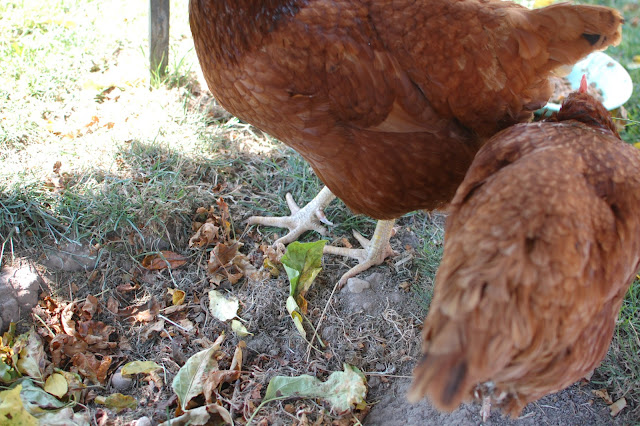 The last time I was down at City House, the Mister called one evening (every night at 8:00).
Here is how the conversation went.

Me: How are Frederick (the cat) and the chickens?

Mister: Frederick is fine..he is on my lap right now and the chickens are all put away (that means that the coop is locked up and all the beaks have been counted).

Mister: One of the chickens is a Rooster.

Mister: One of the chickens is a Rooster!

Me: It is not!  There are three hens.

Mister: (Getting annoyed) One of the hens is a rooster....It has spurs!!!!

Mister: Yes, when I went to count beaks, they were on the roost and there were the spurs, right there on one of the hens.

Me: I don't understand....That can't be, they all three lay eggs and have always been hens.

The conversation went on for awhile and I told him I would check in to this odd thing and we said goodnight.

I decided to call my sister as she has something like, 16 chickens and a rooster..Anyway,. she said she has two older chickens that have grown spurs and was equally shocked when she discovered it. After some web searching we found other reports of the same occurrence.

So, we left it at that and just said it would be added to one of those things about nature that is odd to say the least.

Until.......the other morning...We both woke up to the strange sound of crowing...like a little rooster when it is just learning to crow.  Well, it was the chicken..yes, the chicken with the spurs, crowing like a rooster. Three times this week we have had the same alarm and she/he? is getting better all of the time.

So there you go, the strange chicken story has been told..I know the spurs are not unheard of but how about the crowing...Have you ever heard of such a thing? 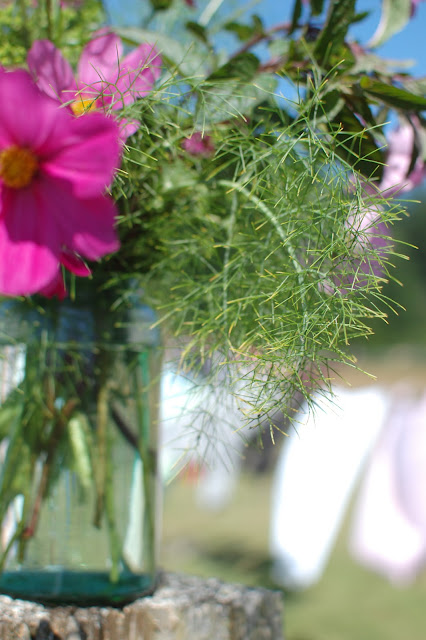 I will leave you to ponder this strange story and wish you all a beautiful summer weekend.