Oh What A Web I Weave 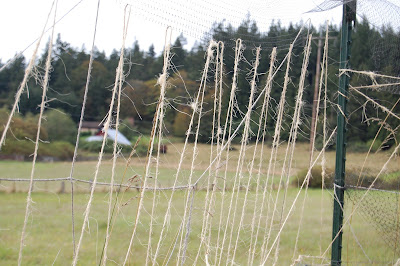 This was my Sunday afternoon project. Finally I have both of the covered runs totally secure (I hope) from any birds of prey sneaking between the net and the fencing. The falcon is a regular visitor and I find myself and Jack the dog running out many times a day when the chickens are squawking to find it on the edge of the netting or on our fence and taking low passes to take a better look at the little chicks (insert bad word)! (never mind, take bad word out). 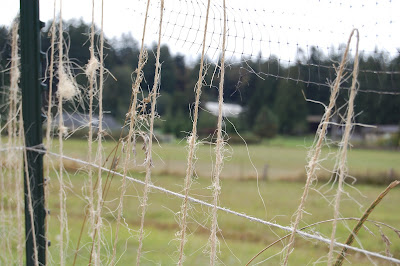 Anyway, this took nearly 3 hours of steady weaving, I know it isn't very attractive but necessary. 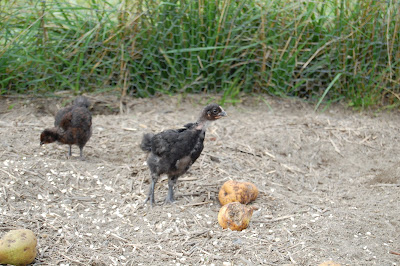 Here is a peek at the chicks, we lost 2 so only have the 4 left. We think a weasel or rat got in the hen house at night through the little door that the chickens use to get to their covered run. I now close the slide door that Mr. B. made after everyone gets on the roost. First thing in the morning, really early, I have to go out and open it as the little chicks are squawking to get out. 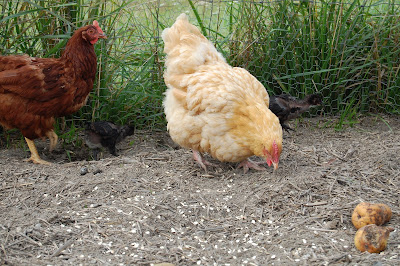 The two moms, really only one hatched them but the Buff (blond) offered to help out as a nanny. 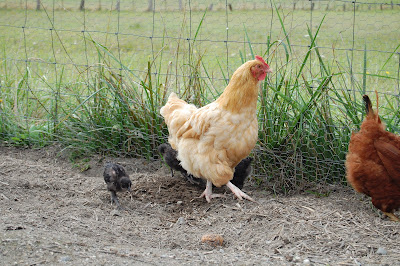 Down below is Goldie who finally got out of the living room and into the hen house. She is doing well but still doesn't trust any of the others. 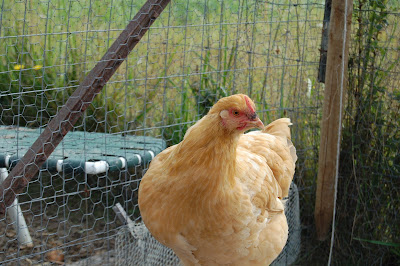 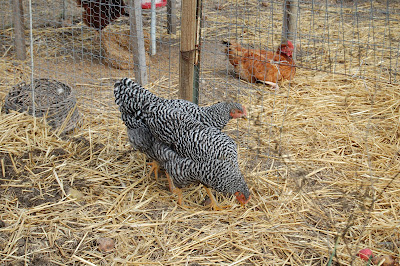 Here are the Stripey sisters who Goldie used to be sisters with but now they are mean to her. You remember the popular girls at school who would hang together and be mean to the less fortunate ones. 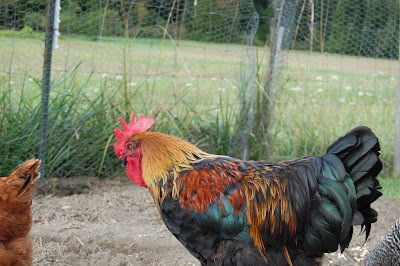 And we mustn't forget the main man Brooster who keeps all order in his flock...he runs a tight ship. He is the best rooster around and we love him.
*
*
I have had some computer problems that I hoped would just fix itself (really?) but it got real nasty yesterday so I had to do the tech help thing today, groan.. so I am running behind on everything. I had hoped to get the Etsy shop opened by tomorrow but it is looking like it might not happen until Monday.
*
I am making the Stuffed Cabbage for dinner tomorrow night that I showed on the last post and I will be giving a full report on Saturday over at The Kitchen Calls so be sure to check in.
*
Have a good night.

I've been debating getting chickens~ we live in a area where coyotes are often seen as are the red tailed hawks~ how long have you had your chickens? are the worth the worry?

Three hours of weaving sounds like a lot of time, but I'm sure your chickens appreciate your hard work. Those little chicks are so adorable. I can't imagine the heartache and frustration of losing any of them to mean predators, even though I know it's "natural" and all. I see so many garden bloggers keeping chickens and I kind of wish I could have them, too, but our homeowner's association doesn't allow them. Blessing in disguise, I don't know. I feel kind of overwhelmed enough with the my first year gardening as it is, so maybe I should just take it one step at a time.

In the meantime, I will live vicariously through you other chicken keepers out there!

(p.s. I responded to your comment on my post about your basil not rooting yet, if you haven't seen it yet.)

katieb - The chickens are worth any work, which is usually not much. It takes some planning to protect and some fine tuning every once in awhile. The reason I had to do the 'weaving' is our hurried effort back when we had the eagle problem. This all could have been done in advance had we done our homework.
We got our chickens a year ago last spring...I encourage anyone who can to have at least a few.

Your rooster is beautiful. They all are, really. :)

Princess and the Pea said...

Brooster the rooster is beautiful! I really is the main man! I would love to have some chickens but we just don't have the room. And our Maddie would be after them all the time.

Hope you can keep that nasty old bird out!