The Rest Of The Buzz 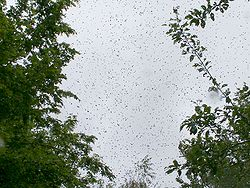 Hello everyone, I hope you are all well and have some exciting plans for the weekend...It's almost here, Yea!

It is time to finish the story about Charlie's Place and the Bees and if you missed it you can catch up with a quick visit here.

Above, is a photo (Wikipedia) of a swarm of bees, thousands of bees, I wish the photo could have been larger so you could get the effect of how amazing it is when you see one. It is when the queen and all of the bees go to find another place for their hive, and with this in your mind, I will begin the rest of the story. 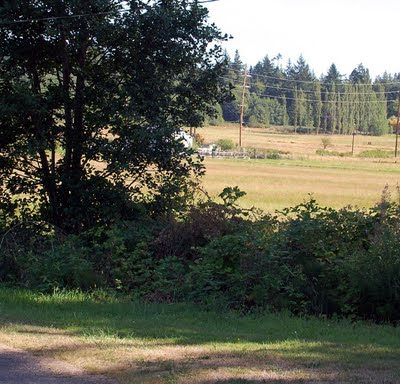 To set the stage, here is a view from Charlie's, of the Little House (click to enlarge) and the field between the properties. If you look really close you can see the clothes on the line, the garden and the new fenced back field for the chickens. Across from the front of the house, on the edge of the field is where we have our bees.
I have tried to figure out a good way to get all of the information in, without going on and on, as most of you who get comments from me know, I have a problem condensing my words...Did I just hear groaning? Anyway, this is the best condensing I could do.
As you remember, Charlie's bees died and The Mr. left a hive up there that was clear of wax moths to add bees to at a later date. Winter had now past and it was the end of April, the bees we ordered were added to the second hive at our house, my hubby was pleased, as his exsisting hive had made it through the winter (his first as a beekeeper) and it was very strong......About a week later my sweetie came in the house from his usual quick check on the bees, with a awful look on his face, he was visibly pained, "The entire original hive is gone, they left". It was heartbreaking, it' hard to explain, but you get close to them, he calls them "his girls" and when he works with them he says "Hi girls, I'm just going to.....". A saddness covered the Little House.
In the mean time, Charlie's property was purchased by the owners of the land that The Little House is on and they tilled up his old garden and offered us an area to put in what we wanted. We ended up putting in some Zukes and Sweetmeat squash.
About the third week of May, I went up to water the squash, and decided to drive around the back of the house (circular drive around) and park up above the garden and take the steps down. 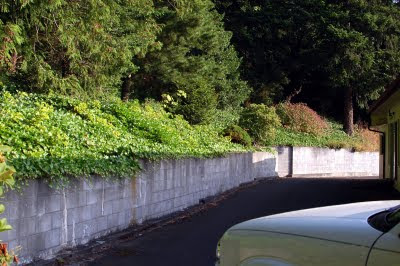 Around I went, and as I was coming around the other side...there were thousands of bees, picture the top photo, it was a swarm, I couldn't believe my eyes and the sound of the buzzing filled the air. 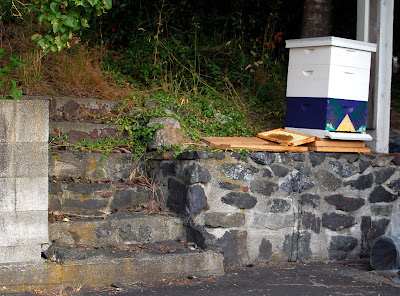 Over on the wall, where the other hive had been, was something that looked like a cloth draped over the stone (did I mention I still need to get glasses) but as I looked again, I realized it was a cloth, it was a drape of bees! They were clustered so thick and the cloud of bees were getting bigger by the second, they kept coming from the hill. My mind raced, it's hard to think for a second when you see something so unbelievable and massive. Finally (it really only took my quick mind a second, haha) I said "A swarm"!!!! 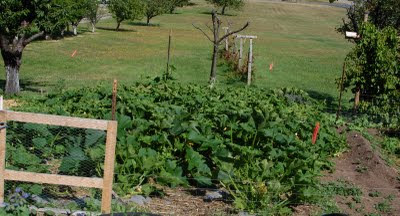 I flew past the garden, down the drive and to our house, ran in sayin hurry, hurry, you have a swarm at Charlie's.....We have never moved so fast, we quickly gathered hive parts and bee gear and took off. Once we got up there, The Mr. encouraged them to go into the other hive and eventually the settled in.

How strange though, that they wanted to fill that empty spot where the old, moth invaded hive had been. 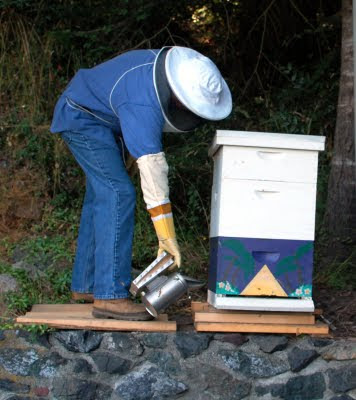 And so it goes, that in the end.....Charlies request for The Mr. to tend to his hives, have been fulfilled. 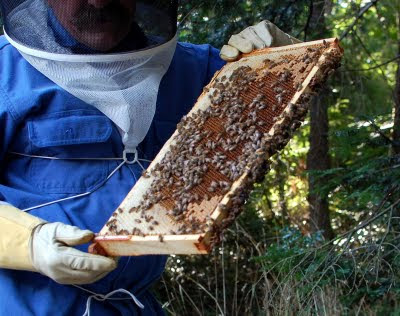 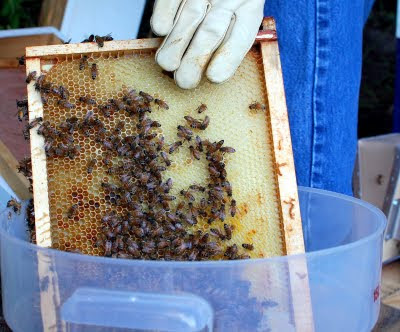 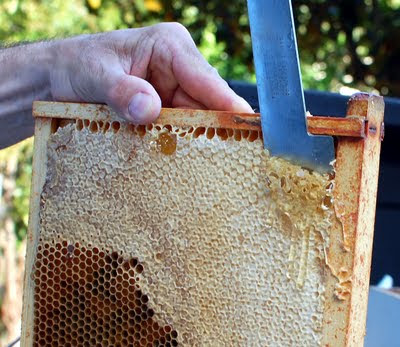 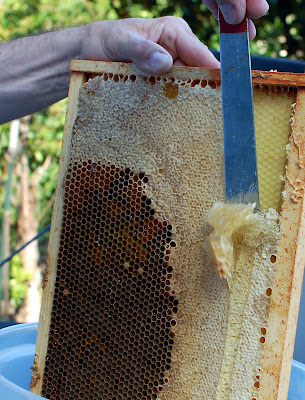 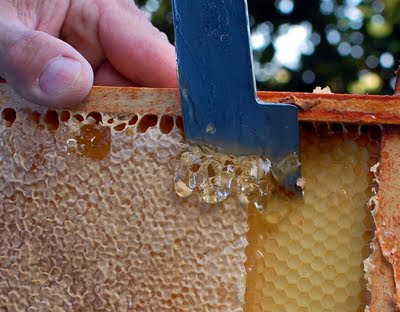 And, perhaps, the lost bees came back home.

Great story, I love the photos near the end, like all good stories this one had a very good ending, I am so glad the bees came back.
Regards
Edward

That's so cool! Thanks for sharing this story. It's kinda nice to see where you live (paradise indeed), and to get a little insight on the life of bees. Love all the photos, especially those last with the honey. Mmmm!

A great story. I also love that last photo. I would love to have some bees here.

Bees are amazing creatures! When there was a swarm at my brother's house, he had to hire a bee expert to corral them up!

I've always thought this would be an interesting hobby, but then, I'm afraid I would get stung!!!

What a wonderful story! I'm so glad they came home!
Have a wonderful weekend!
Lori
www.lorimayinteriors.com/blog

happy to see you today and happy to stop by today, my friend

Wow what a crazy story, I would have freaked out with all those bees... very scary. I sure am glad you two knew what to do! Hugs, Diane

Wonderful post! I'm so glad you didn't condense your story any more than you did! It's so interesting, especially to those of us who have never had bees!

Sheri, and to think it was all brought about by the garden at Charlie's place. ;) great story, happy happenings... PS: by now I'm hoping that all are happy and healthy and joyous, gramma.

Sheri wonderful pictures and what a great story!