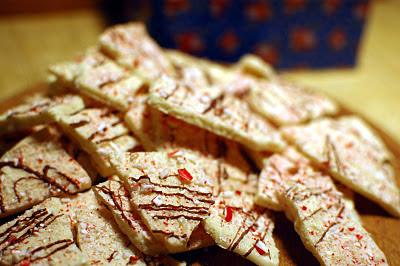 This sweet journey of mine started from a comment made, innocently enough, by Martha Stewart on a recent show. I had just caught the very end of the segment where she said something like "You had better get your peppermint bark while you can, as it isn't around long!" So the hunt was on...It really made no sense how the obsession took over, as I had never had peppermint bark or even wanted it, but just knowing it may be limited made me a crazed woman on a mission. After looking and looking I finally located it....Only 5 packages left, I grabbed them, then put 'one' back feeling guilty for hoarding (leaving one means not hoarding, right?). I couldn't wait to sample it , my taste buds had already decided what it would be like, it must be wonderful if it was so hard to find and only around for a short time...I tore into the package and took a nice bite, with a glazed look in my eyes, lids half closed and a slight smirk, I let it sit on my tongue to melt a bit. It didn't take long before the sad truth set in, the fact that my brain made a better candy than the well known and highly praised Chocolate maker that will remain unnamed. What to do now? 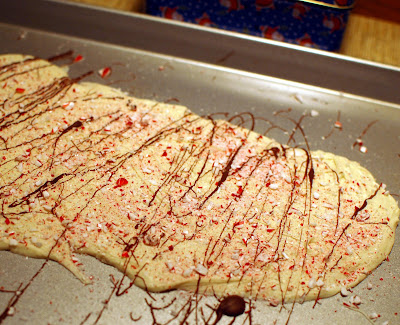 So here we are, after 3 different tries, I do believe that I have the recipe that the brain told the taste buds about. It ends up being the one that I made with the grand kids. The one above, made for hubby to take to work, turned out well but is missing that one little addition that I will explain below. 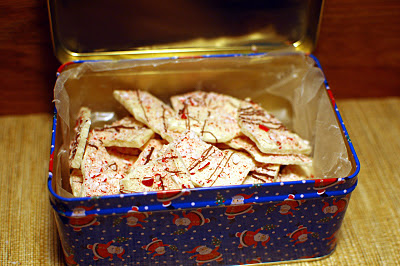 Approximately 10 small ( the smallest) candy canes - These ended up tasting stronger than the larger ones.
1 package white chocolate chips
Dark chocolate chips to melt for the drizzle
Dash of vanilla
*

This will come together fast so have your baking sheet ready. I used a non-stick but have read you can use veg. spray. Also, take your aggressions out on the candy canes by putting them in a heavy duty gallon freezer bag or double up with a regular one...now take a rolling pin after it until it is in little pieces.
*

Empty the chocolate into a heat proof bowl and microwave for 60 seconds then take out and stir, put it back in for 30 seconds and stir...be careful now...put it back in for 20 seconds and take out and stir, if you have a few chunks left keep stirring and see if they will melt out, you may need to put it back in but be careful not to over melt.
*
Vanilla, add just a few drops, it makes a big difference but can overpower if you do too much! Stir well.
*
Take it to your baking sheet and pour it out, smoothing about 1/8 to 1/4 , I like it thin. Then sprinkle the peppermint by hand to cover.
*
Melt about 1/4 Cup of the dark or milk chocolate in the same bowl but it should take much less time in the micro.
*
I took a spoon and dipped it in the choc. and just drizzled it over...see the photo above.
*
Let cool in fridge for at least 3 hrs. Then break into pieces....Enjoy!
*
Email me if you have a question. xo
Posted by Sherri B. at 6:39 AM

Sherri
Thank you for posting a tried and true recipe. I really hate finding one on line, only to be disappointed with it.
I love this stuff, now I can make it myself!
I had some last year with the candy canes that aren't peppermint and it was really tasty too.
Blessings-Kimberly

Thank you for this wonderful yummy post.....and your always sweet comments!

Ooh, I love the chocolate drizzle! Everyone's doing peppermint bark lately (including me, haha), but I really like seeing all the different variations on preparation and method. I'm trying yours next! :)

Wow, this looks delicious--and beautiful too!! Happy Holidays to you and your family!

I've never heard of this - fascinating! Candy canes are imported and therefore outrageously expensive here, but I might find some cheaper in the UK when I get there...

That looks so good. Something I've never tried because no one in my family likes peppermint! Except me. I finally had to quite buying candy canes even because I couldn't manage to get rid of one box in a year.

This looks yummy and Christmasy!!! I'd better not make it though!!! I know who would eat most of it!!!!!

Thank you for sharing the recipe, it does look absolutely delicious. Not sure it will be around long enough to need a tin to store it in though! :) xx

Thanks for posting this. I have all the ingredients ready to go. I'll probably do this tomorrow night ~ this was chili night and I already have a very messy kitchen. Thanks for the pictures too. I know it's good; I've had it before and I've never forgotten it.

Thanks for this post! I used to make this as a kid with my mom and loved it!

definitely something to try. can't wait. (:

Sounds great! I've heard of adding a little peppermint extract, the vanilla is new to me-enjoy:@)

Oh my word. As I read this post I was soooo over come with the desire to rush out and buy some peppermint bark! Seriously! ! ! LOL
I do love the peppermint kisses. They are way good too.
I'm going to try your recipe though, it would be fun to give away as neighbor gifts. It looks pretty!
We have snow today....as far as I'm concerned, it's a 4 letter word :-) but my 15 yr old is in snowmobile heaven!
Enjoy
Mercy

this post is the inspiration i need! i bought white chocolate chips, but my recipe says to only use white chocolate which list cocoa butter in the ingredients, mine does not~ any problems melting the chips? your bark looks delish!
hugs to you~

Thank you all for your nice comments. I have something to add...Katie B. emailed and asked about the need to have cocoa in the white chips and I looked at both brands that I have...yikes, no cocoa. Nestle said to add 2 Tbs. of vegetable shortening to chips before putting in micro. I didn't do this (maybe this is why I will never be a 'real' baker). Hope this hasn't thrown anyone off. xo

Thanks for posting, they look delicious!

I have never tried peppermint bark. You have me curious now!

ooo this sounds so good!

Thankyou for your lovely comment Sherri- you bet I had a HUGE pot of tea afterwards while I dried out!