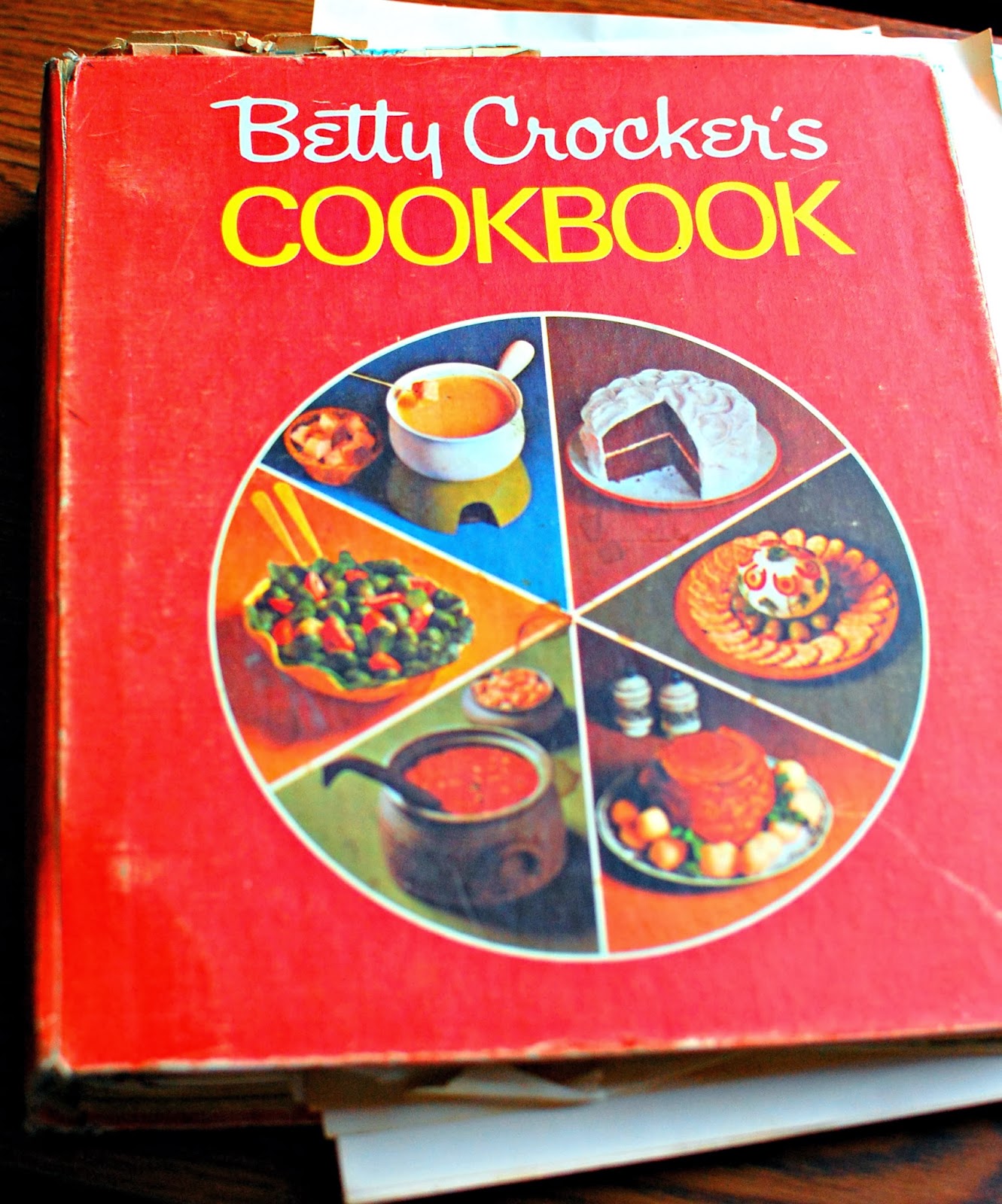 Here it is, the Betty Crocker's Cookbook 1969 that I got in the early 70's.  It was my only cookbook for years and served me well...as you can see.

As I have matured in my cooking tastes it has been ignored, for newer and more modern recipes.  Lately I have been seeing quite a resurgence in the dishes of the past...with a new spin put on them of course.  So I thought, let's take another look inside. 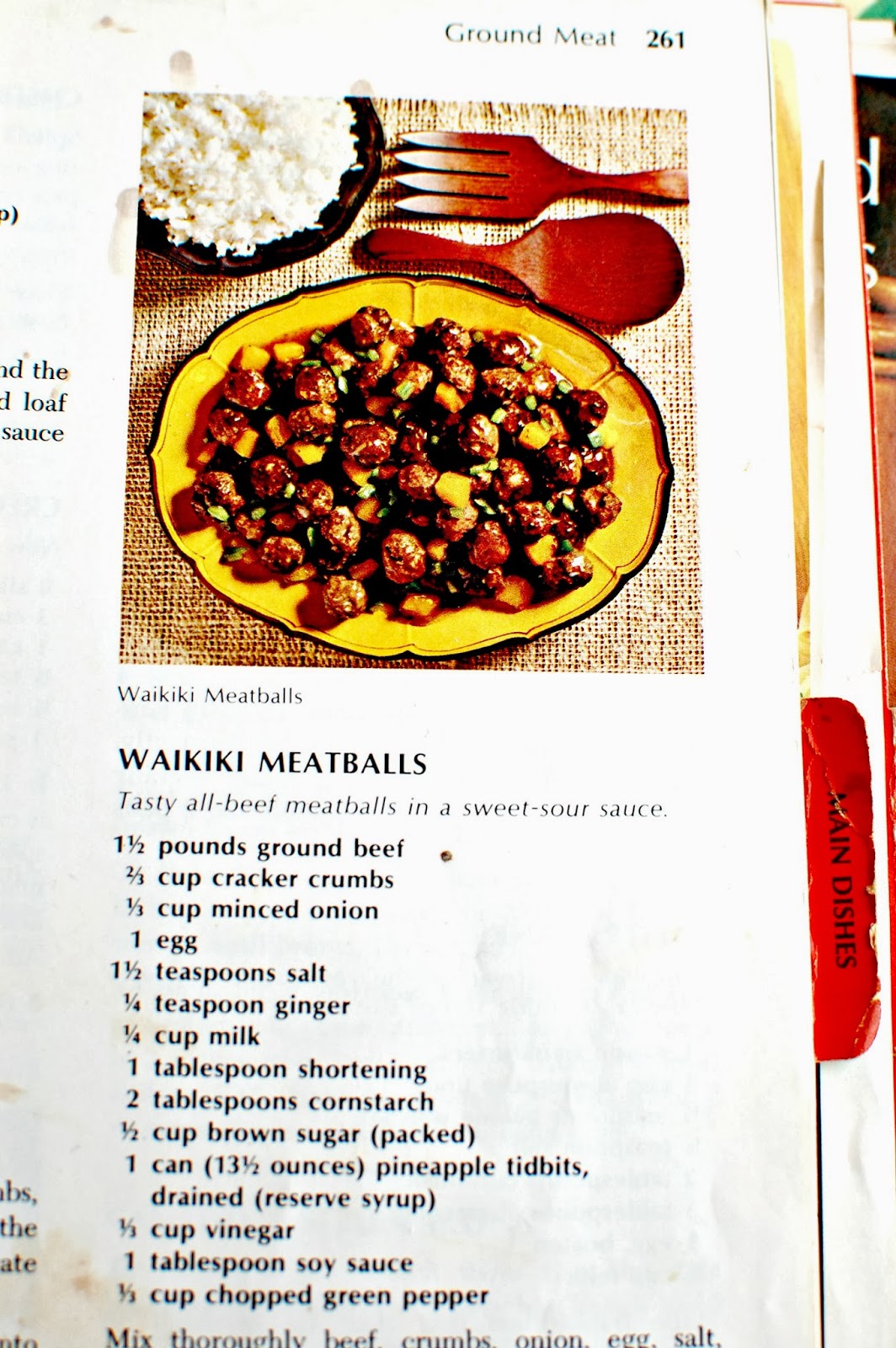 This favorite, literally fell out of the book as did half of the pages as you can see below. 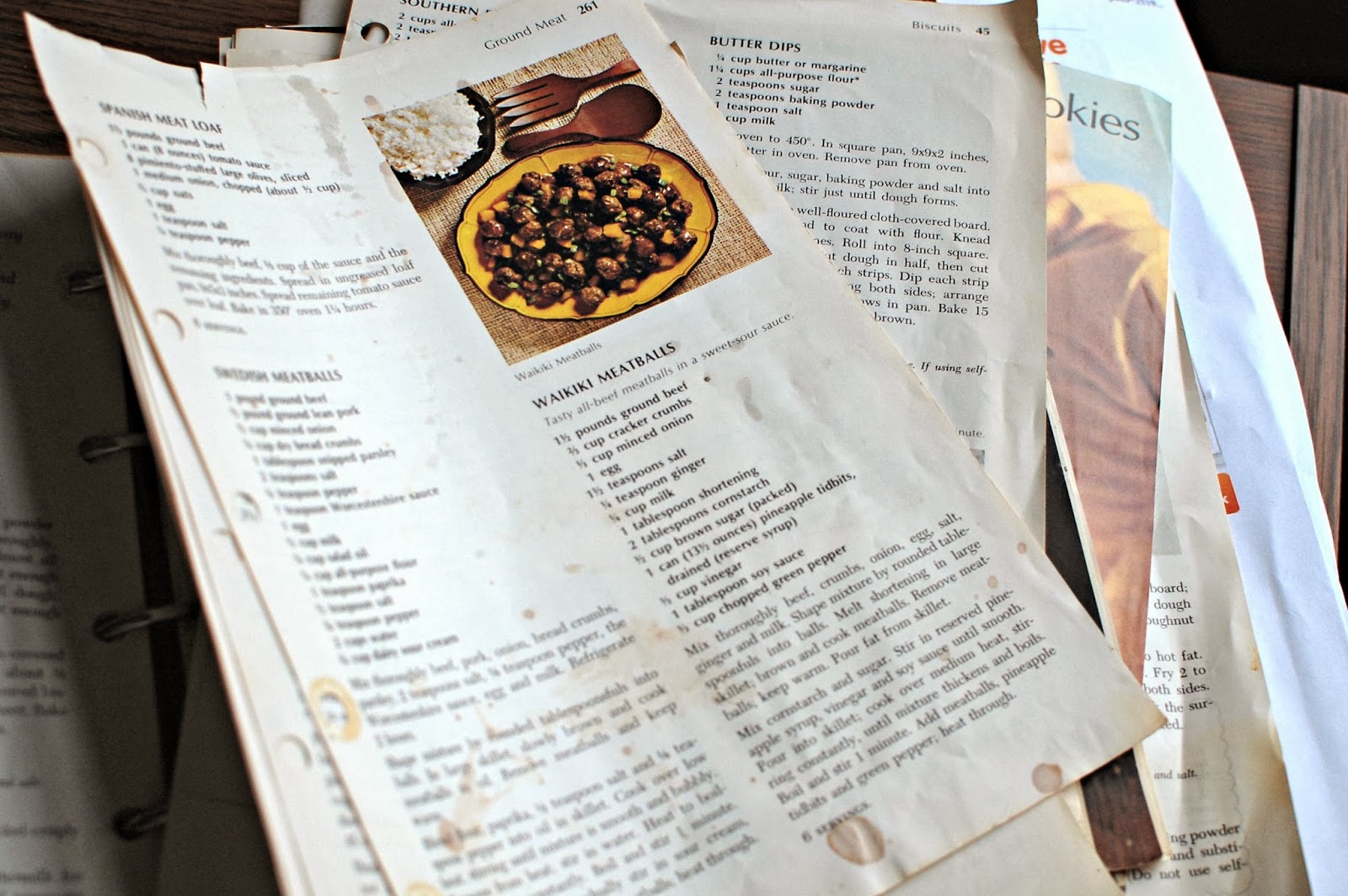 Waikiki Meatballs, one of the very first 'exotic' recipes I tried in my newlywed kitchen.  I was so proud to stir up something none of the other wives in our circle had made!

So, last night I decided to try it out again and see if it tasted as I remembered. 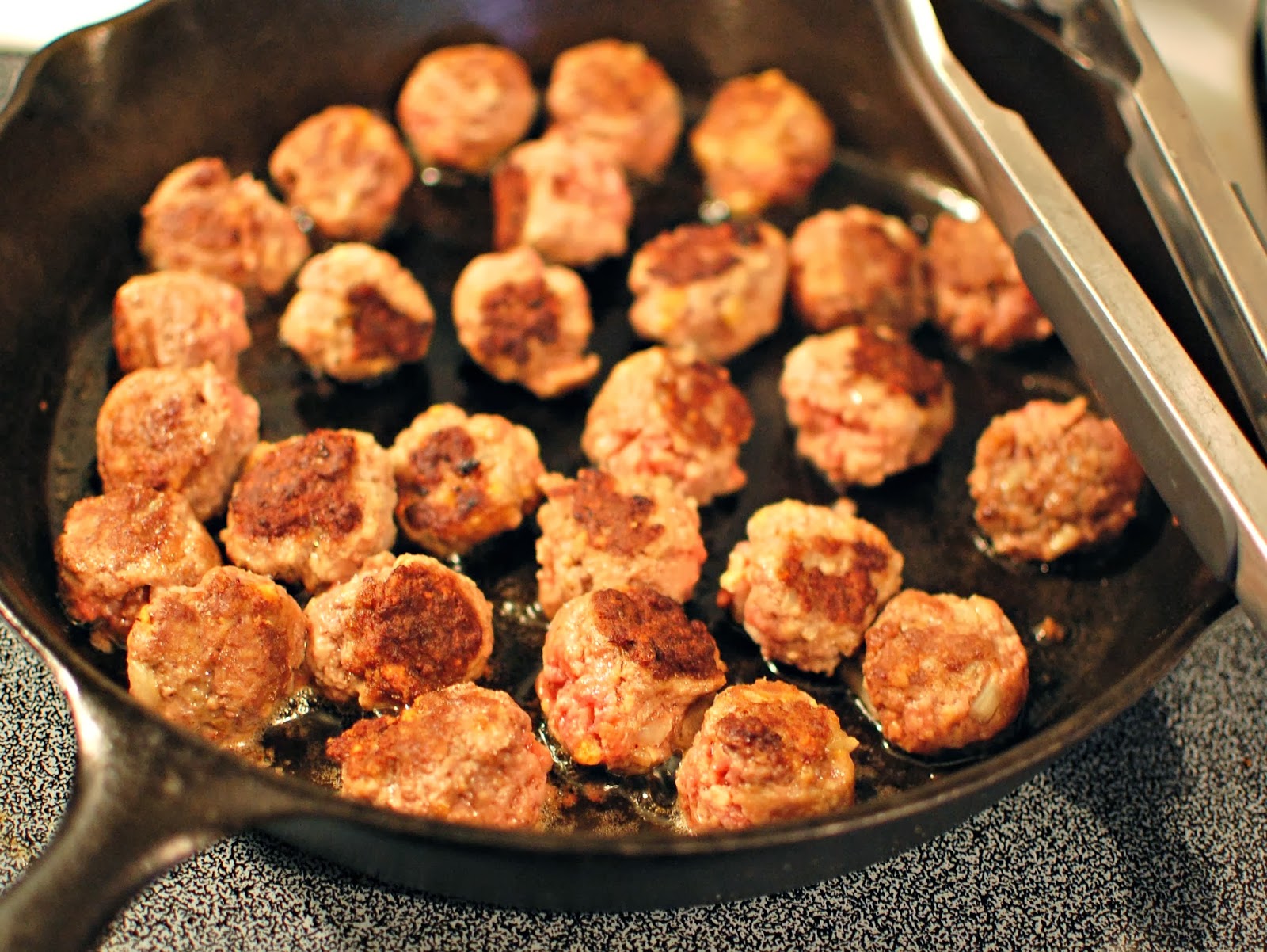 I must confess, I had forgotten how 'not fun' browning meatballs can be and remembered thinking, way back then, that it would be much better if they were meat 'squares' instead of balls. 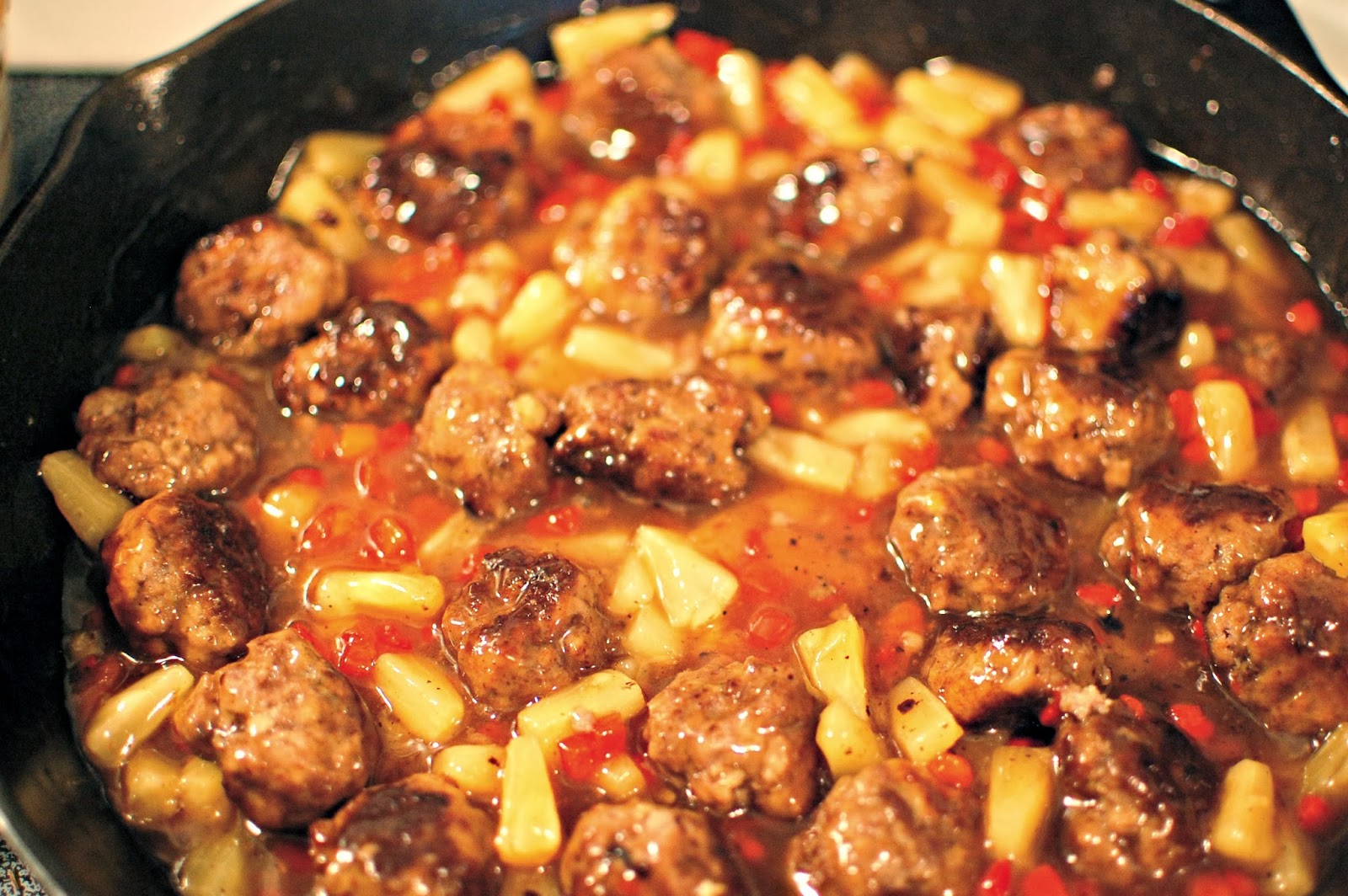 I changed it up a bit and switched the green pepper out for a small jar of drained pimentos. 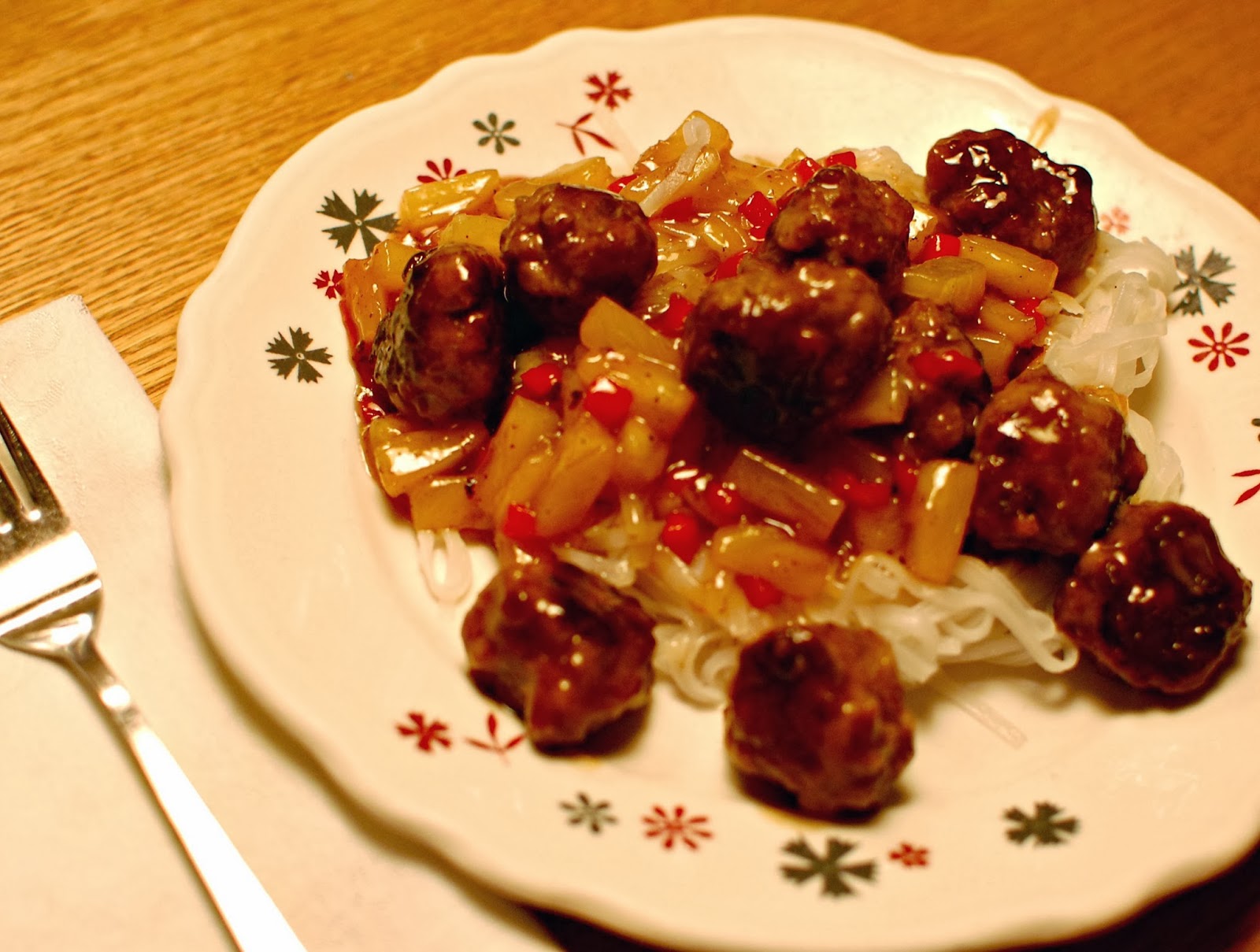 Here is the end result, and there was a  nod of approval from the Mister.  In those early years I served it over rice but chose rice noodles this time.

As I look back, I realize how far our culinary tastes have come in these years.  In the 1970's this would have been a special dinner, perhaps for company and now we could easily find something like this in the frozen food section to 'zap' in the microwave on a evening short on time...How times have changed. 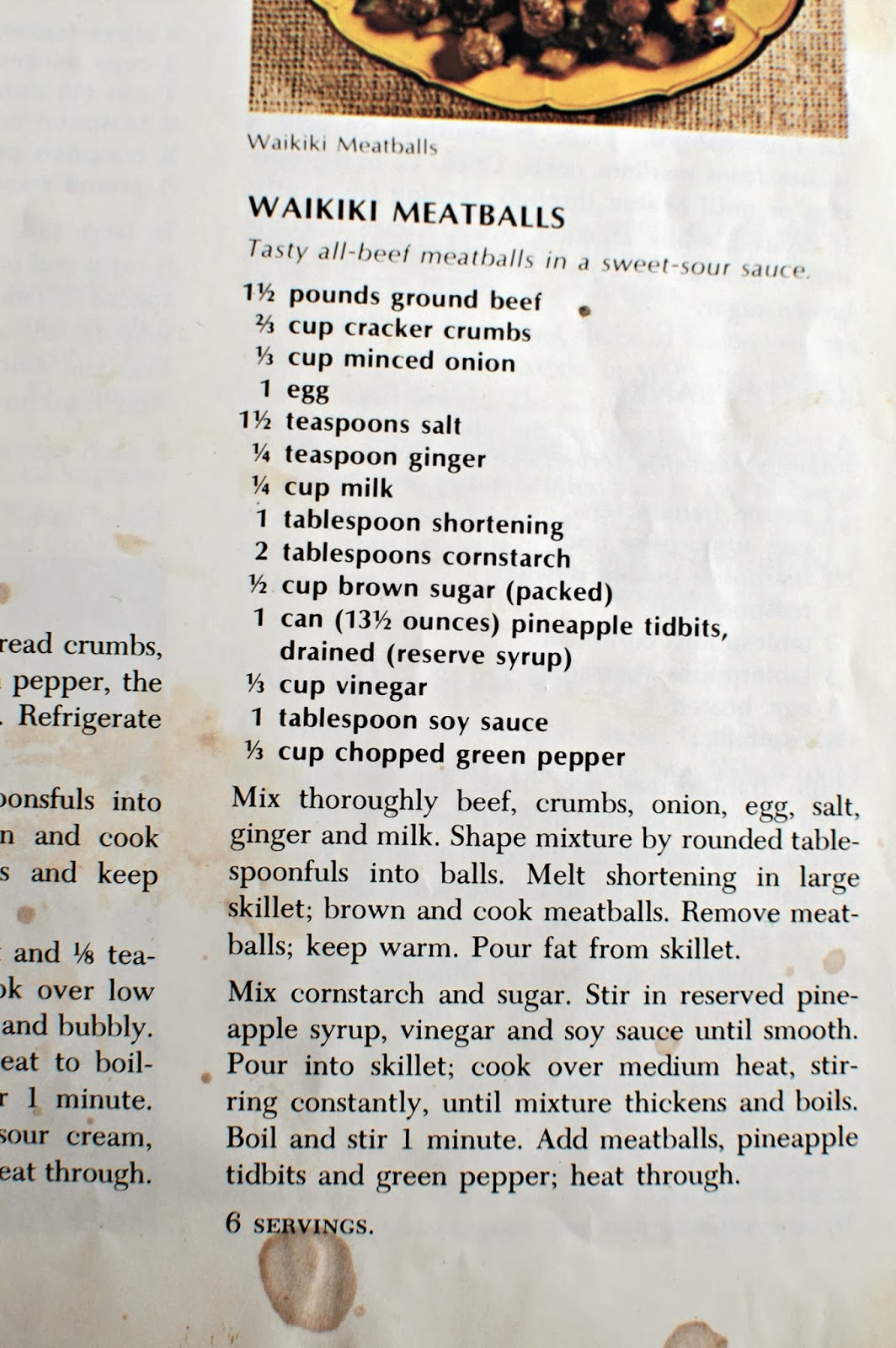 If you are interested, here is the full recipe....short and sweet.

Changes that I made:

I could not find that size of pineapple tidbits so I used two 8 oz. cans and it turned out fine.
Saffola oil instead of shortening.
Less Sodium soy sauce.
1 4oz. jar of pimento, drained, in place of green pepper.

I did enjoy reliving my first years of cooking and will try to include more of these early recipes into my menus in the future.

What was your first cookbook and do you ever make any of your early recipes, still?
I'd love to hear about it.

This does bring back memories for me. I still have my Betty Crocker cookbook that was given to me as a wedding shower gift in 1955. I learned to cook from that book. It is full of tape and is patched all over but it is filled with love and memories.

Sherri- I had that SAME cookbook- still do. It was my "go to" book for years and years. The one I have is a bound one rather than a loose leaf one so it is still intact...but pages are splattered and stained. lol

I made those several times over the years. xo Diana

These meatballs sound great! I'd love to see them as appys on a food pic, nice chunk of pineapple, a square of pepper, then the meatball and sauce! My first cookbook was BH&G, that one got lost in a move but I bought another one (later version) to replace it:@)

My mom gave me this cookbook and I still use it from time to time. I love cookbooks and have quite a few of them in my corner hutch. This recipe looks good. I might have to pull out the trusty cookbook and give them a whirl.

Thanks so much for sharing.
Have a wonderful day.

I was also given one as a wedding gift in 1977. I still put it to use at Thanksgiving. One section is dedicated to Roasting a Turkey.
I can never remember how many hours per pound and what temp.
Thank for the trip down memory lane.

I have a Better Home and Gardens Cookbook that I received when I got married. I still use it!

oh I remember this recipe! And it still looks yummy! I cook my meatballs on a foil lined cookie sheet in the oven! I do 4 sheets at a time and freeze in freezer bags!
I think I will make this recipe again ,,,next time!
Thanks for this nostalgic moment!

Sherri B!
I think we were brides around the same time! I remember making the same recipe over rice!
It was fun walking down memory lane with you today!
w/L

How fun to take a walk down memory lane and it looks like it paid off :) Your meatballs look mouth-watering good! I am with you and hate browning meatballs and for that reason we don't have them very often.

Hi Sherri, I still have the same cookbook too! Got it as a wedding gift in '75! But I'm sure I haven't used mine like you have yours!!...but I love vintage! Your meatballs look scrumptious! Stay warm~~~Roxie

That looks so delicious, Sherri.
My first cookbook looks like your with pages falling out too.
Mine was a 4-H cookbook.
I don't use recipe books much anymore!

My very first cookbook is a Betty Crocker, too. Still on the shelf but it doesn't get used much.

And I love cookbooks and it's always such a wonderful thing to look through old ones, isn't it?

Oh my gosh. I'm pretty sure my mom had that exact same cookbook because it looks SO familiar to me! I used to make recipes (or tried - I was very young) from it all the time. There's something very nostalgic about the photos, the text, the whole layout...

Your post caught my eye because I just posted about my mom's cookbook from 1947. Funny to see how cooking has evolved over the years. Your meal looks delicious.